TBM POINT OF VIEW: Make Speed a Real Priority in Your Business

In today’s markets and dynamic business environment, speed is a core advantage. Now is a good time to consider what speed means for your business and how your company could become faster, more responsive, and more agile. 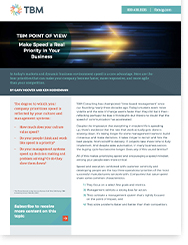 Consider What Speed Means for Your Business

Topics addressed in this article:

At TBM Consulting we have prioritized “time-based management” since our founding nearly three decades ago. Markets seem more volatile and the rate of change seems faster than they did back then – a perception that we think mostly reflects the bias of hindsight – but there’s no doubt that the speed of communication has accelerated.

There’s some evidence—despite the impression that everything in modern life is speeding up—that the rate that work actually gets done is slowing down. It’s taking longer for some management teams to build consensus and make decisions. It takes longer to recruit and hire the best people. IT projects take more time from start to delivery. And despite sales automation, the buying cycle has gotten longer in many industries. Does that sound familiar? All of this makes prioritizing speed and a speed mindset even more critical.

Here’s what prioritizing speed could look like in your company. Read the full article to learn more.