PHC brought production of the safety cutter back to the U.S. from China, while reducing packaging costs 30% and lead times by 45-60 days. Executives project an annual revenue increase of least 10%

Pacific Handy Cutter Inc. (PHC) followed a well-worn path when it outsourced production of its S4 safety cutter to a contract manufacturer in Jiangsu Province, China. But when it came time to launch its next-generation S8-series carton cutters to replace the S4, PHC executives determined that manufacturing in the United States was a better choice. Rising labor costs, long lead times, and quality issues drove the decision to reshore.

“We wanted better control over the manufacturing process and believed we could produce the product faster here in the United States as opposed to all the back and forth we experienced with the Chinese manufacturer,” says Mark Marinovich, PHC's President and CEO.

In addition to the cost savings, PHC is counting on revenue growth from increasing customer preference for U.S.-made hand tools. Marinovich says such sentiment could increase PHC’s revenues for the safety cutter line as much as 10% annually. And he sees a potential for 20% to 30% growth if PHC can add a few larger customers. “We’re able to produce a high-quality product—small hand tools suited for Asian production—here in the U.S. with the same goal I had when I entered the business 30 years ago: to increase profitability” Marinovich says.

To make the S8 product line at a lower cost than its Chinese supplier, PHC determined it needed a 3.5-second takt time with no more than two employees per work cell. The cutter currently produced in China requires about 12 employees

The company producing the automated machines for the S8 is located two miles away from PHC. The company’s suppliers also are nearby. PHC’s three parts suppliers are within a 25-mile radius, and its three packaging suppliers are about 10 miles away. The reshoring strategy should eliminate or significantly reduce logistics challenges and inventory shortages that PHC has experienced with its Chinese supplier.

"PHC nearly ran out of its flagship product during an eight-day strike at the ports of Long Beach and Los Angeles", Garavaglia says. Localizing production can mitigate similar supply chain disruptions, which cost U.S. industrial products companies $2.2 billion, according to a PricewaterhouseCoopers study. Such delays are unacceptable for PHC’s clients, which include major, high-volume retailers.

To help achieve its delivery goals, the company involved local suppliers and its machine builder in a four-day kaizen event.

Solution: Bring production of the safety cutter back from China to its U.S. facility, while reducing production costs through automation, lean work cells, and strategic sourcing.

PHC executives realized that assembly workers needed to multi-task to achieve the desired takt time using the one-piece- ow process aided by the machine automation. Spina and the PHC team came up with seven assembly-process options during the kaizen event.

They ultimately chose a model with two large irrigation tubes situated on each side of the operator to deliver parts directly to the point of assembly. This allows the operator to simultaneously grab the plastic cutter body with the right hand and the blade channel with the left hand and then connect the two parts.

The process requires only two workers and a water spider to load the parts into the machine. During the test run, the company was able to meet its assembly goal of 3.5 seconds per product. At this rate, PHC expects to produce 7,714 cutters per day.

The company also made adjustments to cut packaging costs by 30%. PHC will use perforated bags on a roll that will be automatically heat-sealed and released into a 12-pack box.

Results: Expected annual revenue increase of least 10%, with the potential for 20% to 30% growth, lead times reduced by 45 to 60 days, 30% reduction in packaging costs.

PHC expects to begin S8 production and ramp up to more than 7,000 units a day once all customers are converted from the S4 to the S8. As production ramps up, PHC executives expect to win new business from companies that have committed to buying U.S.-made goods. For instance Wal-Mart, a former PHC customer, pledged to source $50 billion over the next 10 years from U.S. suppliers. PHC hopes to win back that business plus more from customers who have large union workforces that prefer using “Made in America” products, Marinovich says. “We’re at the cutting edge of a resurgence of ‘made in the United States,’” Marinovich says. “We saw it happening and wanted to be a part of that.” 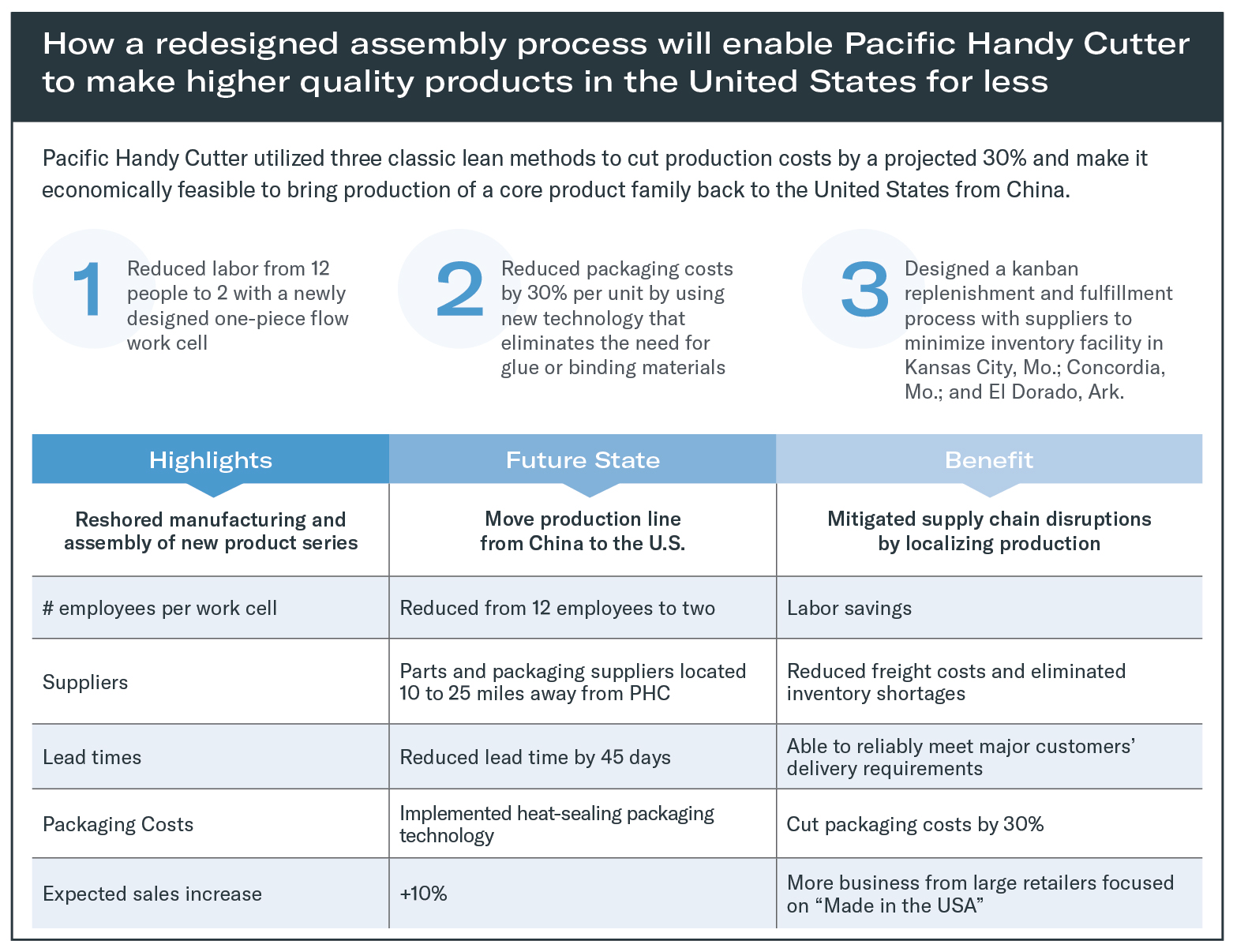