TBM performed a pre-purchase operational assessment and helped apply lean manufacturing methods and practices to every stage of the production process.

Over two years, Digi-Star improved productivity by 25% while increasing sales by 31%.

Modern farming bears little resemblance to the bucolic picture many people have of the farmer toiling away tirelessly in his fields. Today it’s a highly scientific, capital-intensive business designed to squeeze maximum long-term yield out of every square foot of acreage.

Similarly, in addition to higher productivity and other benefits, the visual management and production changes that Digi-Star employees have implemented over recent years make it clear to everyone exactly how they’re performing at any hour on any given day, and what they need to do to hit their targets.

By implementing lean manufacturing practices over the past two years, Digi-Star has racked up over $700,000 in annual productivity gains, a 31% increase in sales per square foot, and a 25% increase in productivity.

The company’s employees have benefited directly from these performance improvements through a 77% increase in the company’s hourly incentive plan payout. 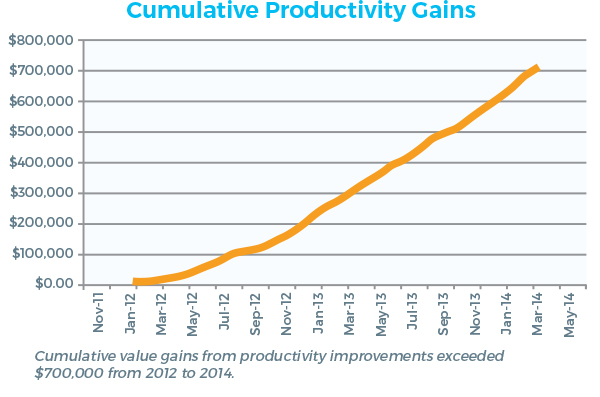 Challenge: How to boost capacity to meet growing demand. The company had plans to buy equipment and add production lines but Baird Capital believed near- and long-term growth could be met within the existing footprint.

From the Factory to the Field

“It was a well-run, profitable and growing company when we bought it, “says Roberto Ferranti, Principal, Portfolio Operations for Baird Capital, a private equity firm. “It was clean and high tech and eerily quiet because all of the machines were sound protected.”

Baird Capital bought Digi-Star at the end of 2011 and sold it in April 2015 to Topcon Positioning Group (Livermore, Calif.), which markets similar products. TBM performed the 2011 pre-purchase operational assessment of Digi-Star, which is located in Fort Atkinson, Wis., with additional business units in the Netherlands and United Kingdom.

The primary components of Digi-Star’s electronic scales are a steel shaft, or load cell, and a tiny strain gauge that measures any changes in weight. Each load cell fits specific equipment; they can be incorporated into an axle or farm equipment support bar, for example. Employees machine each load cell to tight tolerances before cleaning.

They then adhere the strain gauges in a clean room. Each load cell is then calibrated, encased in resin and painted. 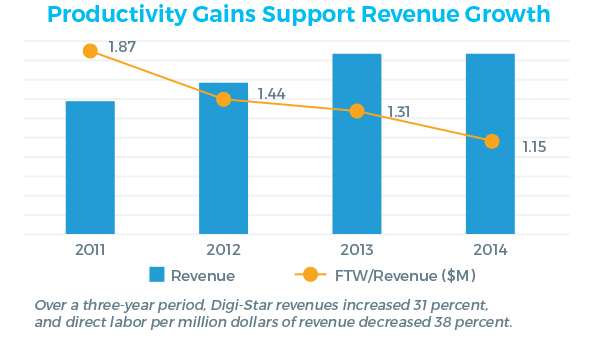 “Digi-Star has a long rich history going back about 30 years in using weight sensors,” said Mac Moore, the company’s President and CEO, in a recent interview with an industry group.* “At the most basic level we simply measure something, but then we take it to the next level and through processors and software we take that information and make it useful for the farmer.”

In early 2012, when Ferranti and TBM began working with the company, plant managers were making plans to buy more equipment and expand production into an unused part of the facility. Three years later those plans are still tucked away somewhere and annual output in the existing production space has risen 40%.

Operational improvements at Digi-Star began with a kaizen event in the steel bar receiving area. Subsequent projects tackled each downstream step in the production process all the way through shipping.

Kaizen teams created standard work and eliminated all types of waste, including wasted motion, walking, unnecessary steps and rework. They evaluated workflow and created new work cells and assembly lines, reducing travel time by 50% to 85%. They shrank batch sizes by 50%, and WIP by up to 75%. In one department, for example, by implementing fundamental lean manufacturing practices like one-piece flow and a kanban system, they reduced 30 tables of work-in-process inventory down to three tables.

Solution: TBM performed the pre-purchase operational assessment and then helped to apply lean manufacturing methods and practices to every stage of the production process. A variable pay incentive provided a financial reward to employees for operational improvements.

A Win-Win-Win for the Company, Customers and Employees

To maximize employee participation and creativity, the company made a commitment to not lay off any employees because of productivity improvements, which would have been a short-sighted move in any case because the gains were soon absorbed by strong business growth. Digi-Star also makes a substantial investment in every employee in the form of a 27-month long development program that cross-trains everyone in every production step.

When the Digi-Star kaizen teams analyzed each area, they considered both the current takt time (or customer demand rate) and the projected takt time four years in the future. One of the primary goals of all of the operational improvement efforts, according to Ferranti, was to make sure the production operations could meet projected demand with the existing infrastructure.

“Now there are visual metrics all over the place,” he adds. “Everyone knows how they’re doing at any given time, whether they’re on track, behind or ahead.” Tracking daily metrics is supported by weekly management board walks to review issues and countermeasures, as well as the current status of longer-term projects. Management reviews goals and performance with employees each month, when they also celebrate accomplishments.

One of the unique elements of the business that supported the company’s lean manufacturing transformation was an existing incentive pay system. Although the variable pay component had a potential upside of $1.50 per hour—based equally on department performance and the company’s overall performance—it had coasted along at around $0.50 per hour for years. Within the first year of their lean journey, it climbed to $0.69 per hour, and it hit $1.09 per hour in the second year.

Results: Over 2 years, Digi-Star captured $700,000 in annual productivity gains, a 31% increase in sales, and a 25% increase in productivity. The company has also accommodated significant sales growth without increasing its manufacturing space.

In conclusion, he shares the story of a key customer, a major OEM, that visited Digi-Star in 2011 as part of its three-year supplier review cycle, and then followed up in 2014. “Again, the facility was never poorly run. But on their most recent audit they were blown away by the changes: the raw productivity improvements, the engagement of the workforce and the daily metric tracking. They’ve really come a long way,” Ferranti says.