A private-equity firm that TBM works with on a regular basis acquired a controlling position in a mid-sized, U.S. manufacturer. The publicly traded company had reported $350 million in annual sales and $58 million in earnings in its most recent fiscal year. At the time it employed over 400 people at a single location, which included the headquarters office, the production floor, packaging and distribution.

During the operational due diligence, TBM advisers identified significant opportunities to improve EBITDA and working capital by analyzing core capabilities and comparing current production practices with best practices. On the positive side, the plant was well organized and well maintained, and order-fill rates were best-in-class (greater than 99%). The management team was experienced and worked well together. They also had a stable, long-term workforce that responded to gain-sharing and skills-development incentives. Purchasing was well managed, and inventory control was good.

Challenge: The company was already growing steadily and comfortably profitable. But, as its stock-price appreciation ultimately revealed, there was massive potential for sales and earnings growth.

The company lacked a clear vision and direction, and a lukewarm embrace of lean practices in operations and the supply chain created some major opportunities. Specifically, based on the due diligence analysis, total capacity could be doubled with minimal capital investment, and the entire footprint could support a 4X capacity increase. Better inventory management would free up millions of dollars in working capital. The potential EBIDTA benefit—stemming from higher machine utilization, better labor allocation and supply chain improvements—ranged from $5 million to $8 million per year.

After the acquisition was final, the transformation began. To build a world-class management team, the private-equity firm brought in a new CEO from a much larger corporation. He hired new marketing, sales, legal and operations leaders. They ultimately replaced or created new positions for over half of the executives and senior managers. During the first 18 months the company also made two complementary acquisitions, one for $40 million and the other for $150 million.

To capture the targeted cost savings and inventory reductions, work on the operations side began with an initial assessment. It included a thorough analysis of sales, costs and inventory. For example, when the team looked closely at inventory, then valued at $37.3 million, they found that 22 percent was actually unusable and several quality assurance holds hold items were over a year old.

The management team created a current-state value-stream map based on direct observations of production processes and material flow that helped identify improvement targets. To establish priorities they rated the opportunities based on impact and difficulty, and incorporated them into a future-state map and a detailed go-forward plan.

Coming out of the assessment, management’s high-level objectives were to improve labor productivity by 25-35%, double raw material inventory turns, improve finished goods turns, and revamp the quality system to eliminate the need for 100% inspection of incoming material.

“On the soft side, they also wanted to establish internal operational improvement capabilities by introducing a continuous improvement management system and developing a lean program leader,” adds Hoover. “I don’t think anyone fully realized, after the tools and mindset had been fully introduced, how much pent-up creativity would be released among the employees.”

All told, in one 12-month period, TBM helped the management team and employees completely redesign the plant’s work schedule, execute 25 cross-functional kaizen events, negotiate a new lease that reduced plant floor space by 85,000 square feet, manage 20% volume growth, significantly improve material flow, successfully integrate the two acquisitions, and save over $2 million in hard costs, with another $2 million in savings on the immediate horizon. 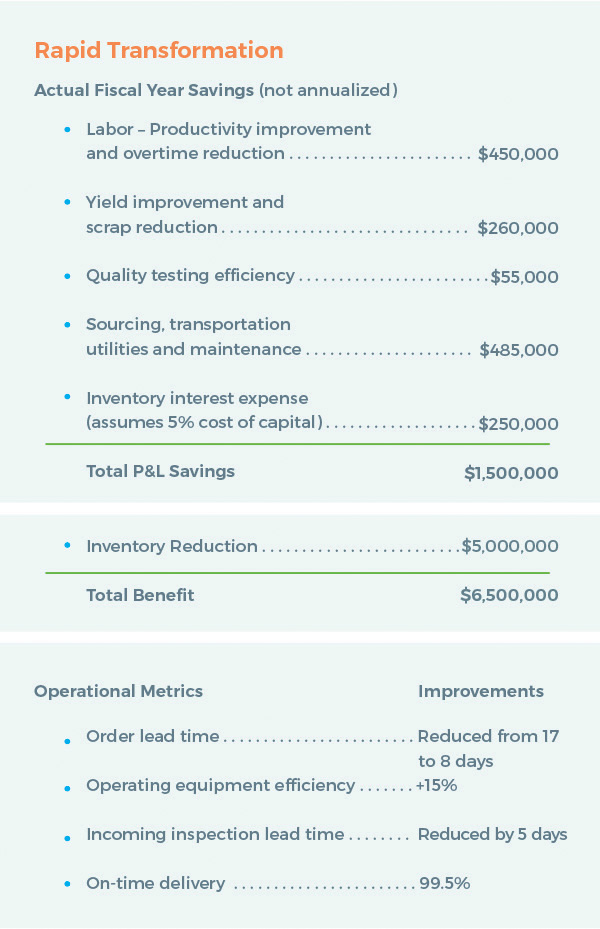 During this time, the operational improvements along with the management changes and acquisitions captured the attention of investors. The company’s stock price first doubled and then really took off when several large corporations made competing buyout offers. The private-equity firm ultimately realized a 5X gain on its initial investment.