The private equity firm and portfolio company continue to re-engage TBM to assess an additional strategic acquisition.
Download Full Case Study
In this case study about private equity value creation, we describe the evolution and benefits of a long-term client engagement spanning multiple acquisitions built on trust.  The engagement is ongoing and spans operational due diligence, post-acquisition integration and performance improvement at a portfolio company.

Doing what you say you’re going to do. Delivering when you say you’re going to deliver. There is no better way for building trust and a good working relationship over time. This is just as true between organizations as it is between people. In this case study we describe the evolution and benefits of a long-term client engagement spanning multiple acquisitions built on trust.

Acquisitions are a critical time for building trust on multiple levels. In this case TBM’s involvement began when our private equity client asked us to evaluate a potential acquisition. The tier-one automotive supplier was very profitable and had aggressive growth plans. Our assignment was to validate the capabilities of the leadership team, determine whether the company’s profitability was sustainable, and assess how prepared they were to grow.

Following TBM’s due diligence model, in the fall of 2013 we evaluated the current state of the business, reviewed their market position and growth potential, and identified potential risks. When we visited we found an exceptionally well-managed company and a highly capable management team. The organization was well aligned for execution of its business plan at every level. The culture was performance-driven and people consistently made decisions based on hard data, although there were some structural issues which we will explain below. The facilities were well maintained and capacities reasonably utilized, and they had a sound capital plan in place to support growth projections.

We did identify one major performance gap. For the company’s primary production operation, operating equipment efficiency (OEE) was running below 50%. Best-in-class performance for similar operations was closer to 90%. Key drivers of OEE are cycle time, machine uptime and quality. For this organization, the weak points were production rates and changeover times.

Management had already created improvement plans for each of these areas, but these plans weren’t aggressive enough. In our report we noted that significant reductions in production cycle times were possible. Changeover times, which were averaging between 140-180 minutes, could be reduced by 25-50% with little effort, and could ultimately brought down to around 10 minutes.

As part of the due diligence process, we documented the business’s full potential and a stretch plan, including the impact of improvements on operational metrics and margins, EBITDA and annual profit growth (Figure 1). We noted that the ongoing rollout of the company’s lean initiative, while still in the early stages, could significantly improve financial performance versus the current plan. Eventually, based on TBM’s recommendation and other factors, our private equity client finalized the acquisition. Then we really got to work. 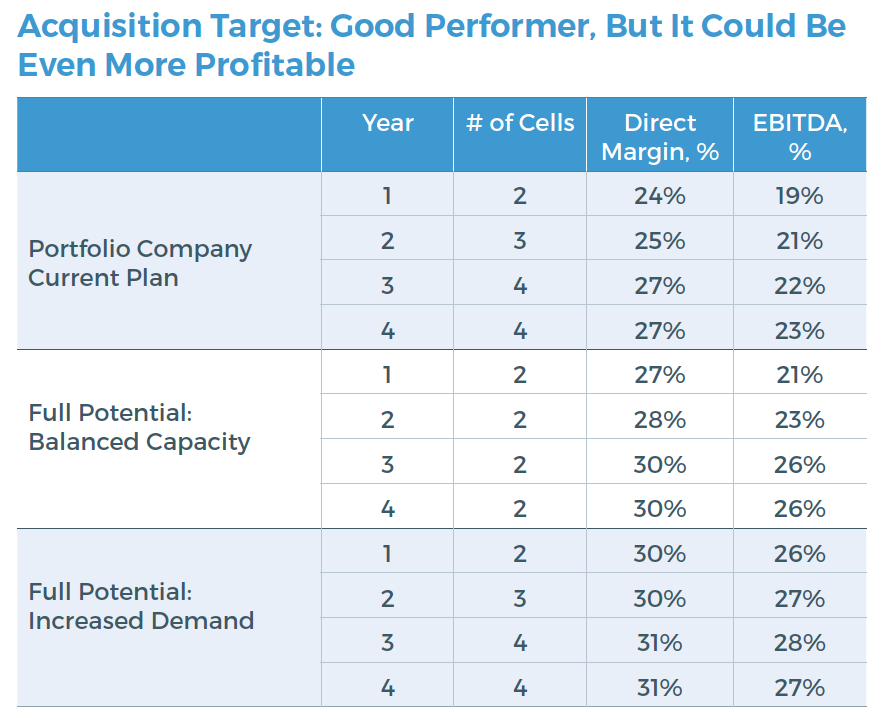 From Plan to Execution

Following the acquisition, TBM maintained our positive relationship with the leaders of the acquired company. It wasn’t long before they asked us to make some of the changes identified during the due diligence process. They also wanted help with something else.

The company was on the verge of achieving its revenue growth targets, but they had some structural issues. Acknowledging some of our observations during the due diligence, leaders had begun to recognize that their existing processes and procedures – which worked perfectly well when the business was smaller – were now holding them back. Managers and supervisors relied too much on brute force and a command and control approach to get orders out the door.

What the company needed was a more robust daily management system. Such a system would help everyone monitor KPIs and allow managers to become more proactive. We began to help implement the daily management system in one production facility, which would serve as a model for the others. TBM advisors coached the teams on how to setup and use SQDC (safety, quality, delivery and cost) performance boards and hour-by-hour charts in each work cell.

In addition, we re-introduced a variety of proven problem-solving methods and tools. These efforts slowly but steadily began to build a root cause analysis and countermeasure mentality among employees.

Our work with the company also addressed the opportunities to reduce machine setup times that were identified during the due diligence process. Changeover times, uptime and other metrics quickly improved, meeting our original projections. About midway through the management system implementation, another acquisition opportunity arose.

Back into the Breach

Once again, our private equity client called on TBM’s expertise to perform the operational due diligence on the potential investment, which would be integrated into the first company, nearly doubling its annual sales. Specifically, they asked us to validate the strength of the target company’s relationship with its primary customer, prioritize potential cost improvements, and evaluate the overall effectiveness and growth potential of the leadership team.

While not as well-run as the first acquisition – the owner had maintained a long-distance management approach for years – the target was a solid performer and had established a good foundation on which to grow. Still, there were many opportunities to improve. Financially speaking, significant gains could be realized by reducing direct labor (through attrition) and the associated cost savings.

There were opportunities to improve efficiency and equipment utilization as well. For example, job-to-job setup times ranged from two to eight hours. These times were not tracked, and were probably understated. A systematic setup reduction program with some minor equipment investments could reduce these setup times by 50-60%. In combination with a visual management system and better maintenance practices, we estimated that machine downtime could easily be cut in half, which would open up capacity.

The biggest concern emerging from the due diligence was the cultural fit of this acquisition, and how quickly it could be integrated. We recognized this potential pitfall based on our understanding of the deal thesis and direct experience with senior business leaders.

The second acquisition’s management team, while highly experienced, was used to working for a hands-off owner. That would not be the case under the new leadership structure, which would demand accountability and steady business improvements. Future management conflicts could undermine performance and weaken the company’s relationship with its primary customer.

Our final assessment of the company was favorable. According to our estimates, operating profit could be improved from around 12% to upwards of 19%, or by more than $11 million.

Results:  The company achieved the targeted improvements and an increase in EBITDA identified during the due diligence process.  This strengthened our credibility and client relationship, leading to similar engagement on subsequent acquisitions.

Our private equity client completed the second acquisition several months after the due diligence. TBM was then asked to help implement some of the recommended changes. Those implementations are still in the early to middle stages. We have encountered the anticipated difficulties, and tackled them accordingly.

There were several advantages to TBM’s involvement throughout the lifecycle of these private equity investments. We quickly recognized the cultural disconnects and consolidation opportunities. When the deals were finalized, not much time was required to step in and begin to work with operational leaders on the targeted changes.

Working together over the years on these engagements has generated a great deal of trust and openness. We clearly understand our client’s objectives, and give them our unfiltered assessment of what is actually possible, and they believe it because we’ve consistently delivered.
In this example, when we did end up encountering cultural resistance to the proposed changes – because it had been anticipated, and the value had been clearly communicated – the CEO stepped in personally to make sure the improvements were made.

Partners Throughout the Investment Lifecycle