“We set stretch goals two years ago that each of my presidents thought were ludicrous...”

Jason began working with TBM in 2005. “We weren’t realizing our intrinsic value as a public company,” adds Dave. “Effective private owners like ours establish aggressive goals — we basically had a two-year window to execute a five-year plan for transforming the company. TBM is very comfortable in situations like this. They immediately began to show us, hands on, how to use the Policy Deployment process and LeanSigma methodologies to quickly drive Operational Excellence and culture change throughout our five businesses.”

"Policy Deployment (also known as Strategy Deployment) has been critical.  It helps us identify what's really important to the company—the vital few objectives that our lives depend on. More importantly, it tells us what we should not be focusing our resources on.  We also use it as a communications tool to cascade those objectives down through each level of the organization so everyone is focused on what we need to do. And LeanSigma processes provide the speed and tool sets for achieving ad sustaining Operational Excellence, the foundation for profitable and organic growth."

Challenge: How to create a organization focused on key value drivers. Needed to integrate an outside partner into their investment review process for acquisitions. How to reduce lead times, improve quality, create pricing flexibility and facilitate innovation.

Today, Jason is either the North American global leader in 905 of its niche products.  "The active example set by my entire management team has been essential.  One of us is always on one kaizen team, on a shift-change walk through or involved in some other activity with our workers to demonstrate how important this is for all of us. It’s a journey that’s never done because substantial improvement opportunities always exist.”

"For culture change to take hold, our people need to see that we’re passionate about lean and actively involved.” 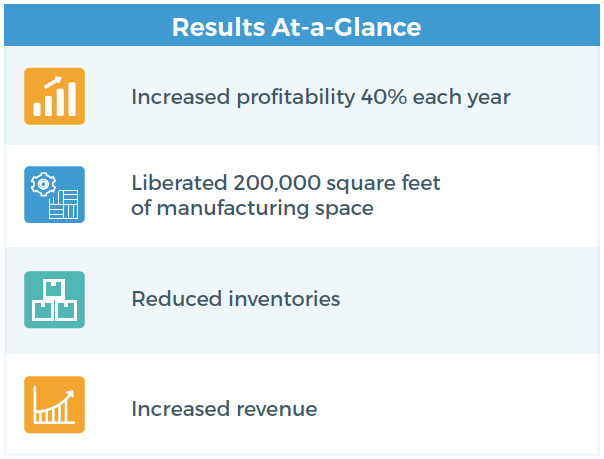 Results: Increased profitability 40% each year for three years; recovered 200,000 square feet of manufacturing space; reduced inventory by 21%; inventory turns up 2X; gross profit up 8%; helped Jason to become a global leader in 90% of its niche markets.