TBM Consulting Group helped Carlisle create and roll out the Carlisle Operating System (COS) across all of its global businesses.

$70 million in cost savings and a 2 million reduction in floor space.

Like most U.S. manufacturers, Carlisle Companies Inc. had been using various lean and Six Sigma tools to make operational improvements for decades. But even though Carlisle was keeping up with competitors in its three primary sectors and consistently outperforming the S&P 500 index, something was missing. That something was clear to CEO David Roberts when he first started visiting the plants after joining the company in 2007.

“When I walked into a factory, I would have no idea how they measured productivity,” he recalls. “Every plant measured it differently. It was obvious that we needed a consistent operating method for all of our factories.”

But consistently measuring productivity was just the start. There were, Roberts believed, significant opportunities to perform better, much better in fact. “Frankly, I was tired of hearing about lower-cost manufacturing in China. I was convinced that if we did the right things in the organization, we could compete with China.”

After rolling out the Carlisle Operating System (COS) almost four years ago, the company has started to realize many of those opportunities. Since 2009, COS initiatives have generated more than $70 million in cost savings and reduced the company’s manufacturing and warehousing footprint by nearly two million square feet. Like most U.S. companies, Carlisle saw revenues fall in 2009 during the recession. But unlike most others, the company’s net income increased that year, in part because of its COS initiatives. For 2011 Carlisle posted record sales of $3.2 billion, up 28 percent over 2010.

“Because of the productivity improvements that we’ve implemented, we’ve even brought work out of our China plants and back into the United States. We’re cost competitive with the Chinese, particularly with the cost of wages in China going up,” Roberts reports.

Such results, company leaders are convinced, are only the beginning. Rolling out COS across five major business units—which operate fairly independent—and 75 manufacturing locations worldwide has been no small feat. What ties everything together at Carlisle, as this case study reviews, is strong leadership engagement; a clear alignment between improvement priorities and five-year business goals; and a uniform, clearly communicated operating system that continues to expand as Carlisle’s needs evolve.

Begin With the End in Mind

An overview of the Carlisle Operating System doesn’t start with the elements of the system itself. It starts with Carlisle’s strategic vision. As stated in the company’s annual report, Carlisle’s road map to 2014 has five key targets: global sales of $5 billion, an operating margin increase to 15%, an increase in sales from outside the United States to 30%, a reduction in working capital to 15% of sales, and a total return on invested capital of 15%. Each business unit has its own roadmap with specific targets that, when achieved, will roll up to the corporate objectives. Those targets are fixed and don’t change from year to year (If you would like to read the Q&A with Carlisle CEO, David Roberts, download the case study PDF.)

How each unit will achieve its objectives is determined during the “strategic deployment” process, which establishes annual improvement priorities (AIPs) and key performance indicators (KPIs) at every level of the business. Also known as policy deployment, hoshin kanri or hoshin planning, strategic deployment is an execution tool that aligns business improvement activity with a company’s near- and longerterm objectives and strategy. Monthly management team reviews of performance metrics, linked to their objectives, maintain focus and prompt fast corrective action when any area falls behind.

The approach forces leaders—and the organization as a whole—to focus on a small number of initiatives that will make the biggest impact on growth and profitability.

“In the beginning, each of our businesses had six, seven or eight AIPs. Now each business has three or four,” says Mike Voigt, Vice President of COS. “You have to be able to resource them right. You’re better off working on the business and executing three AIPs really well.”

Roberts created the executive-level COS position in 2009 to emphasize its importance to the corporation. Today, well over half of Carlisle’s workforce has received COS training, mostly in the context of kaizen events. To date, the company has conducted 1,500 week-long and point kaizen improvement events. It continues to run roughly one each month at all of its facilities, and sometimes at supplier sites as well.

“I was tired of hearing about lower-cost manufacturing in China. I was convinced that if we did the right things, we could compete with China.” - David Roberts, Carlisle

Solution: With an immediate focus on improving operating margins and reducing working capital, TBM Consulting Group helped Carlisle create and roll out the Carlisle Operating System (COS) across all of its global businesses.

To sustain its progress Carlisle audits COS-related performance improvement using a three-level assessment process (bronze, silver and gold). As part of planning and review meetings, Voigt and the site managers review the current state of kaizen events for the previous six months.

“We go out to the gemba and audit past kaizen events,” Voigt explains. “Are we sustaining our gains? Are we hitting the objectives that we set? Did they roll up to the financials? Did we get the homework done? Auditing those past kaizen events teaches us what is working well and what is not working that we need to adjust.”

Carlisle also regularly assesses how each site is doing in terms of management behavior with a process known as managing for daily improvement (MDI). MDI is at the heart of the Carlisle Operating System. During the initial rollout of COS, TBM helped the company adapt the MDI principles to Carlisle’s requirements. The program includes SQDC boards (for safety, quality, delivery and cost) that display performance in each work area and for the whole site and sustainment of 5S. The metrics displayed on the boards align with the overall business and corporate goals.

During daily facility walkthroughs, plant managers review performance in each department and work cell, noting areas that require action. The system has instilled accountability and ownership for daily decisions and forced cross-functional cooperation.

“Now I can walk into any factory or distribution center and those boards are there,” Roberts says. “The measurements are different. They might be measuring a different cost metric in a tire plant from what they’re measuring in a foodservice product plant. But at least I can understand what they’re trying to measure, see thatthey’re measuring it every day, see that they’re going on their walks every day, and see if they have corrective actions in place for any issues that have come up.”

Because it requires a change in management thought processes and behavior, it takes time to implement such a program. In the beginning, managers didn’t really know what they were supposed to be doing on the walks. One of the unique aspects of the Carlisle MDI program is the three maturity levels. Each level represents a higher level of sophistication. After a particular practice has been fully adopted, Carlisle managers know what they need to do next to be even more effective.

"The recession created a mindset to do whatever we needed to do to make sure we didn’t have to go through that again.” - Mike Voight, Carlisle

Results: EBIT up 11%, working capital as a percentage of sales down from 30.4% to 21.9%. $70 million in cost savings, a 2 million reduction in floor space, and other improvements in financial performance were attributed to the Carlisle Operating System (COS).

“I remember after they’d been doing the walks for several weeks in one of the facilities, some of the supervisors called me over,” Voigt recalls. “They said, ‘This is the best thing we’ve ever done. For years we’ve been living with incorrect order information, defective parts from upstream processes, and other problems. The Operations management staff are noting it and making somebody responsible for doing something about it.’ Right there, in a nutshell, is the power of MDI.”

As noted above, strategy deployment, common metrics, MDI, ongoing assessments and many other elements of the Carlisle Operating System are designed to help Carlisle’s plants sustain the progress that they make and continue improving. Many of them have been applying lean manufacturing in various forms for years, to varying degrees of success. Support from the CEO, division presidents and the board is what sets the current effort apart, according to Voigt. Any management personnel who didn’t really support COS when it launched have moved on. The 2008-2009 economic recession, which happened soon after launch, helped the program gain traction as well.

“As painful as 2009 was, it created an environment for change,” Voigt says. “Many of our businesses were working three or four days a week, or working 30 to 32 hours. And we had layoffs. The recession created a mindset to do whatever we needed to do to make sure we didn’t have to go through that again.”

As the corporate representative for COS, Voigt’s job is to provide communication, resources and support where and when they are needed. It’s a role that can’t be accomplished from company headquarters. He traveled 49 weeks last year, sharing knowledge and finding “nuggets”—or best practices—that he could bring back to the group.

One of the best ways that Carlisle has found to share knowledge and expertise across the organization is through periodic COS conferences. They’ve conducted several in various regions of the world that bring together division leaders and COS managers who present some of their work and tour one of the local plants.

In addition to non-stop efforts to improve operational excellence in all areas — and bring new acquisitions up-to-speed through assessments, strategy deployment and go-forward plans — Carlisle is working on sales, inventory and operations planning (SIOP) with suppliers and customers. Much of that work centers on the flow of information.

“When you have 75 sites worldwide that you need to move forward where people are already very busy,” Voigt says, “You have to be very strategic about what programs you put out there. They have to be focused and simple bullet points that translate easily. We’re doing the same thing now with TPM [total productive maintenance] that we did with MDI.”

After four years of driving process improvements, TPM has become critical because of the higher velocities that materials are now moving through Carlisle’s facilities. Shorter cycle times mean that all of the equipment must be much more reliable. TBM helped the company develop a three-level TPM program and workshops that it has been rolling out in recent months within each division.

“The feedback has been very positive. People who thought they were doing a good job on maintenance are coming out of the sessions understanding how much opportunity there is yet to improve,” Voigt says. “That’s the way it always goes. There’s always another level of performance excellence to strive for.”

Carlisle began implementing the Carlisle Operating System during 2008, when it also began highlighting its strategic five-year goals in the company’s annual report: $5 billion in sales, 15% operating margins, 30 percent of sales outside the U.S., 15% return on invested capital and 15% working capital as a percentage of sales. 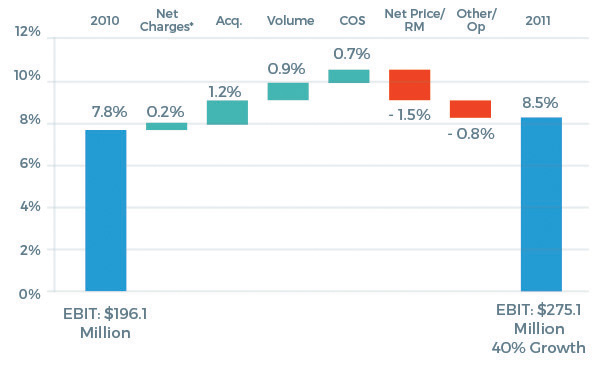 An integral part of Carlisle’s strategy to improve financial results, COS efforts contributed to a 40% increase in earnings before interest and taxes (EBIT), and helped offset raw material price increases and other expenses.

Working Capital as a Percent of Net Sales 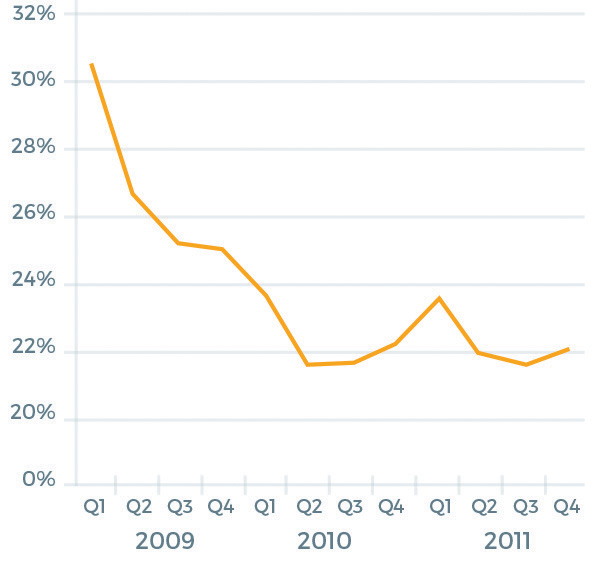 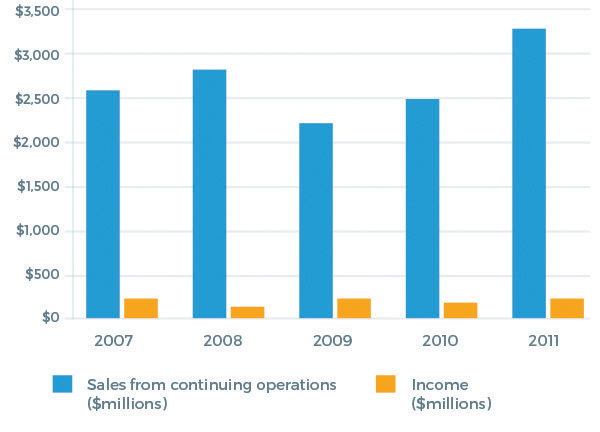 Carlisle annual sales increased 28 percent to $3.22 billion in 2011. Organic price and volume increases accounted for half of the year-over-year growth.