Building a solid knowledge base leads to rapid improvements and acquisition integration.

Many lean companies describe their continuous improvement efforts as long, purposeful journeys down a never-ending road. This hasn’t been the case at food-packaging giant Pactiv.

Since its first kaizen event in the food service segment in April 2007, Pactiv has pursued a CI strategy more like a cross-country relay race with no finish line: Train, stick to the path, execute the crucial handoffs, and if the weather changes suddenly — don’t get distracted — keep moving and push harder than you think you can.

“I ask for 130 percent of goal,” says Greg Noelitch, formerly Pactiv’s VP of Operations and now President of Prestone, another Rank-owned company.

The rules and the course are mapped out in omnipresent workbooks that are the outcome of annual strategy deployment planning and are used by four levels of the company—each with its own workbook designed for that level—to guide and document daily CI work. Company leaders provide the workbooks and ample war room space as tools for supervisors, managers and teams to use to choose, plan and implement CI projects that enable the teams at 55 sites to meet financial goals set during strategy deployment.

Pactiv’s lean relay had a traditional start. The company’s Canandaigua, N.Y., thermoforming plant wanted to reverse a trend of lagging productivity, which started in 2005. Using traditional assessment of the plant followed by a series of kaizen events, teams were able to improve productivity beyond the 2005 level by November.

CI efforts at other plants in Frankfurt, Ill., and elsewhere produced similar results.

The CI work that year and into 2008 focused on manufacturing, involved much one-on-one teaching about how to identify waste, and laid the foundation for what would later become the Pactiv Production System. Largely, it was about learning to see waste where no one could see it before.

“We talked about vibrancy, we talked about 5S, and we talked about some of the fundamentals of lean,” says Mike Hatto, a TBM consultant who worked with the Canandaigua teams. “Within a week’s time we put in place a plan to do one kaizen event a month.”

Before the year ended, the kaizens at Canandaigua and other plants had demonstrated significant opportunity for improved productivity and decreased costs. For example, in the thermoforming area at Canandaigua, cases produced per man-hour increased 67% post-kaizen; and throughput per machine-hour improved 25%. At Frankfurt, kaizen teams demonstrated an 83% improvement in machine setup time.

Hatto recalls that—as is the case with most lean change management—the results began convincing skeptical line operators and opening eyes to waste all around.

“At all levels within a plant, people tend to believe there is more complexity than there is,” Hatto explains. “One of our jobs is to cut through their ‘thought ware’ and help them see that in fact, it is typically less complex than they think. For instance, at Pactiv in 2007, we were working on a lack-of-sheet problem. They all thought that each extrusion line needed to be flexible to do all products, and they had not really considered segmenting product by ease of change over, and dedicating lines to certain sheet types based on volumes — then running a rotation based on minimizing change over difficulty.”

While the results of these and the other front-line improvements were impressive, Pactiv leaders knew that they couldn’t stop there. Enterprise-wide problems that could block growth potential persisted:

“There was also a dawning awareness that they were going about this in a disjointed effort and so weren’t leveraging what they could,” Hatto says.

This drove Pactiv leaders to start organizing work by product line so they weren’t duplicating efforts: Building on the knowledge the company gained in 2007, Pactiv reorganized into value streams in 2008.

Part of the reorganization was building the early companywide CI infrastructure, which included corporate-level regional CI leaders and widening deployment of the Pactiv Production System, the company’s unique interpretation of lean systems management.

According to Hatto and Glenn Kubisiak, another consultant who worked with Pactiv in 2007 and 2008, they installed the system by introducing it to multiple plants within a value stream with a single event at one plant. In the foam value stream, for example, three to five people from each of the sites would come for a kaizen event at one plant, and then would set up a calendar with the regional CI leaders for each plant to conduct a replication event because they all have similar equipment and processes.

CI leaders gave each plant time-specific performance goals scaled up to the kaizen demonstrated capabilities. About a month later, CI leaders would audit the project to make sure the team was using PPS standard work and tracking to meet expectations.

Solution: Traditional lean assessment, training and rapid improvement events introduced at the plant level; and then over the next five years continuing to build knowledge and alignment across, up and through the organization by applying more mature lean tools.

As this was happening, the Pactiv CI effort was being elevated to the systems and philosophy level, and knowledge was rapidly building throughout the organization.

“This process jelled the value stream(s) and created a lot of networking across the technical people,” Hatto says. “They were constantly talking to each other, and they hadn’t done that before. It was a pretty powerful approach that I still think works well.”

Reorganizing into value streams took out more cost by reducing redundancies, but company leaders identified a weak area in sustainment of gains. Hatto remembers that the teams were able to sustain only about half the actual metrics-improvement gains. But, what was also happening that wasn’t being measured was the solidification of a cost-control-focused CI culture — an advantage that continues to propel the company’s growth strategy.

“Ultimately, they were sustaining some portion of what they were learning,” Hatto says. “They were serious about it, and so now they are able to talk to their people in the language of lean.”

Additionally, as more costs were taken out of the business, the company had more cash for acquisitions and to weather the 2008 and 2009 global recession.

“All of the work that we were doing with them was allowing them to buy other companies during the recession,” Kubisiak says. “When other companies were doing badly, Pactiv was out buying its competition. In 2008 they were not even acknowledging that there was a recession. There’s no question that the work they did in those years helped them to make important acquisitions.” 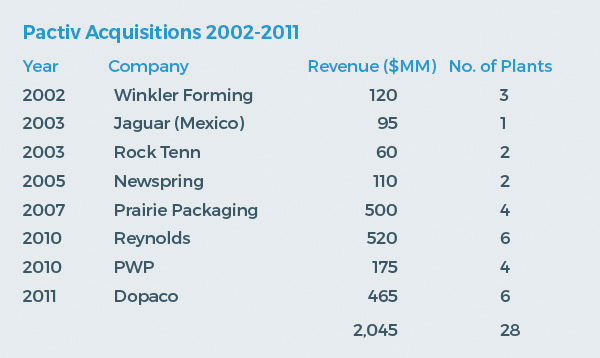 As Pactiv grew through acquisition, the need to replicate its processes and practices became a critical need, as did the needs to do a better job of sustaining gains and tracking progress toward high-level strategic goals. The time had come to introduce strategy deployment, and this is when Pactiv leaders created a four-level approach to achieve alignment.

Through improved alignment and other efforts, Pactiv was able to take an additional $250 million of costs out, and in 2011 was purchased by Rank Group. It has also improved how rapidly it integrates newly purchased companies to achieve rapid returns on investment.

Result: Pactiv used Operational Excellence to increased revenue by 17% and EBITDA by 33% in one year through improved raw material pass-through, cost-savings initiatives, and organic growth and acquisitions. They also took out $250 million in costs in the same period.

Today, lean CI is embedded in the company’s go-forward strategy, although with an increased emphasis on wringing out costs and freeing up cash. Kaizen events continue, but plant teams schedule these as they see necessary to meet their financial goals, Noelitch says. The executive team and other leaders conduct regular plant audits to check on alignment and progress.

Undoubtedly, Pactiv’s successes would not have come without the persistent push to mature as its relay race continues.

“The company went from being capital oriented to being working-capital oriented—it’s from worrying about productivity to worrying about cash,” Kubisiak explains. “That’s a whole different attitude as far as running the company. Throughout all the different endeavors, the bottom line kept improving because the fundamentals were there. As far as sustainment goes, once you educate people, they look at things differently.” 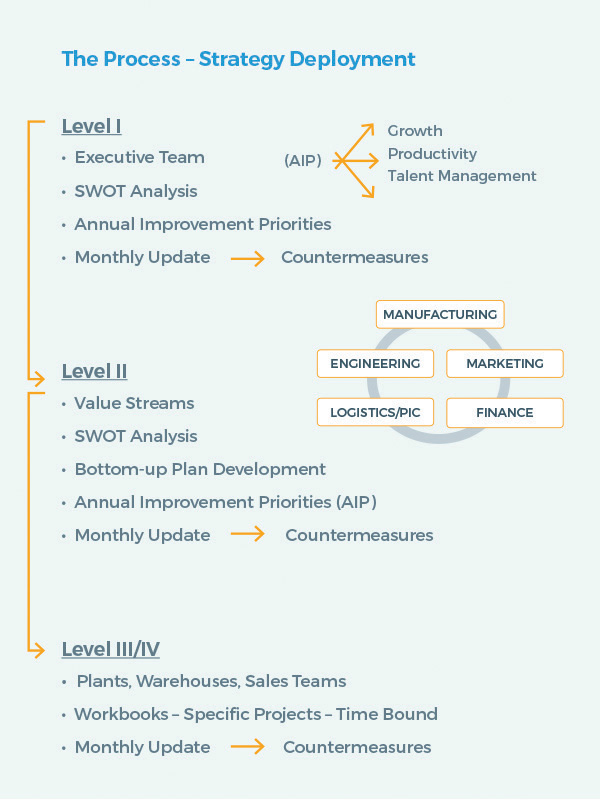