Pull system reduced inventory by $1 million for a single product line and improved case-fill rates from 97.7% to 98.5%.

One business segment needed to reduce inventory levels and improve forecast accuracy in order to become the one-stop source for packaging products in a highly competitive, cost-critical market.

To meet sales targets, marketing-pushed, end-of-quarter promotions trained customers to wait for discounts and stockpile product. Promotions stimulated orders, creating the typical peaks and valleys in volume, but it was impossible to determine if these efforts were boosting overall sales. Smaller customers were forced to buy full-pallet quantities that would take months for them to sell. Manufacturing was forever playing catch-up because its production schedule was based on the sales forecast, a subjective and error-prone target in any business. In some cases the company received valuable point-of-sale data from customers, but nobody was even looking at it.

To overcome such obstacles and get things moving in the right direction, the company engaged TBM Consulting Group, which pulled together a crossdepartmental team who represented the value stream—the flow of both materials and information—for a single product family spanning multiple facilities.

Understanding true demand is the key starting point for creating a lean value chain. Demand volatility will influence service-level decisions and determine, for example, if a product can be produced using a pull system. Such a system relies on customer orders to trigger production and material replenishment. The team developed a solution in three core steps: 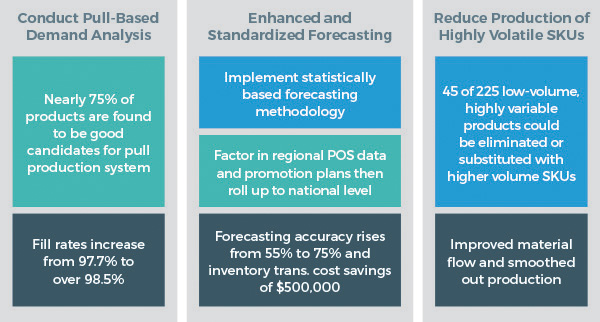 With production driven by direct signals from the customer, manufacturing managers had to learn to think differently about the sales forecast. Going forward, it would be used to plan capacity and resources, but not for actual scheduling.

After performing a thorough demand analysis, the team determined that a higher percentage of products than previously thought could effectively be managed by a pull system. Almost 75% of products were a good candidate for pull. In the end, even though there was less inventory in the supply chain, fill rates improved from around 97.7% to over 98.5%.

The second key initiative recommended by the team was to establish a standard forecasting process. In addition to implementing a statistically based forecasting method, they began to factor in point-of-sale data and upcoming trade promotions into their calculations.

The team developed an 18-month, rolling forecast with weekly projections for the coming three months, and monthly expectations after that. Forecasting accuracy improved from around 55% to upwards of 75%. On the distribution side, the organization had always struggled to allocate inventory between five regions throughout the United States. As part of the revamped forecasting process, they started at the regional level, factoring in point of-sale data for each product as well as anticipated promotions, and rolled that up to the national level. This produced a much more accurate demand forecast by region that will save a projected $500,000 in annual inter-site transportation costs.

The third recommendation of the assessment team focused on 225 highly volatile SKUs (out of 570 total). Dictated by large lot sizes, it made no sense to build and stock so much inventory for these products, which sat in storage for 75 days on average. The team determined that 45 of these low-volume, highly variable products could be eliminated or substituted with higher volume SKUs. Producing the remainder on a make-to-order basis could further improve material flow and smooth out production.

This supplier of food service packaging has begun to break free from its traditional supply chain structure. Customer demand drives replenishment, pulling product from the distribution centers and factories. Manufacturing is no longer churning out highly volatile product in large batches. Forecasts aren’t based exclusively on historical data and salespeople’s hunches. Inventories are on the decline, fewer items are out of stock, and there’s less obsolete product sitting around in the distribution centers.

Ready to win? Start a conversation about accelerating your performance gains.