TBM conducts four weeks of lean training for three CEOs, all of whom received lean certification.

Productivity improves by 35% and sales increase by 2% during a severe economic downturn.

Founded by the late Jhamandas H. Hinduja in 1970 and—until recently—tightly controlled by his family, GEX has embarked on a plant-by-plant cultural transformation based on lean principles in response to heightened competition and customer expectations.

“Their attitude pretty much was that it would not work in the garment industry,” said Mike Serena, director for TBM Consulting Group and one of the TBM team to work with GEX.

“Now, everybody is on board,” says Gaurav D. Hinduja, COO. “It is the most important thing in the company today, but it has taken almost two years to get to this point. I wouldn’t say that we’ve successfully adopted lean everywhere already, but they know that this is the way forward.”

Confident of GEX’s future in the global apparel market, U.S.–based private equity firm, The Blackstone Group, became a partner by investing in a 50.1% stake in the company in 2007. GEX’s commitment to lean process improvement as a high-level strategy attracted Blackstone.

“Lean implementation is very important to GEX and will be a key enabler for their future continued success in profitably, growing their top-line sales revenue and being a world-class quality global garment supplier,” said Jeff Overly, executive director of The Blackstone Group.

The first kaizen event took place at a pilot plant in May 2007. That fall, GEX executives attended a “CEO boot camp” hosted by TBM at which they learned of many successful lean implementations outside of heavy industry.

Challenge: Improve profits by 15% to 20% without adding resources or losing market position. Key client, Nike, suggested adopting lean but GEX’s leadership was skeptical of applying lean in the garment industry.

TBM and GEX launched their LeanSigma® journey at GEX’s Euro Clothing Company (ECC). According to Serena, the implementation went so well, it sparked a raging fire that started spreading throughout the rest of the company. Finally, the company’s leaders fully embraced a LeanSigma® philosophy.

“Initially, we needed to establish a best-piece flow, within cellular line designs, to seriously address recurring quality and equipment issues and monitor all output hourly,” Serena said of the ECC implementation. Fixing [WIP] levels at key interface points, incorporating packing at the end of a production line and a renewed vigilance to quality assurance allowed us to significantly reduce lead time to the customer, significantly increase ‘first-time right’ production and improve our on time delivery to our customers.” According to Serena, the 60% drop in WIP inventory contributed to a substantial reduction in lead time, something that apparel customers greatly value because it helps them meet their business goals. 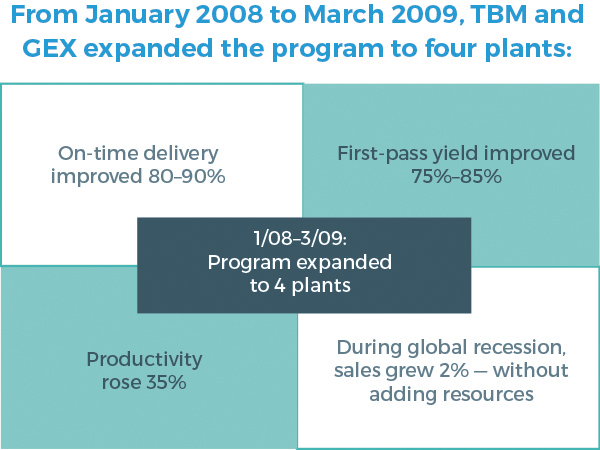 Serena and Gaurav Hinduja said India’s culture can create unique challenges when introducing and applying lean, something that was evident from the beginning of GEX’s efforts.

The biggest challenge relates to worker absenteeism. Serena explains that when it comes to choosing between family events and going to work, family wins most of the time, especially because the garment industry workforce is comprised mostly of women. To help combat high absenteeism, GEX created The Lean Fund, which allows employees to earn and save a bonus when their production line exceeds the 70% efficiency target.

Another cultural challenge is that India is a highly structured and segregated culture in many ways. Socially, there is the well-known caste system, and in the workplace, the tradition of bosses holding power and dictating instructions to workers remains.

Sewing Line: Before Lean / After Lean

A 60% drop in WIP inventory contributed to a substantial reduction in lead time, something that GEX’s customers greatly value because it helps them meet their business goals.

At the employee level, training of mid-managers planted lean thinking at the group-leader level because it was apparent the new practices would have to be accepted among mid-managers before plant-level employees could be properly trained.

“We put all of our general managers in a two week lean certification class so they could start understanding the whole concept,” Gaurav Hinduja said. “Secondly, we just didn’t take no for an answer. We started identifying those people who did understand the meaning of it, and we had to part ways with one or two people who turned out to be big roadblocks.”

Additionally, GEX appointed dedicated continuous improvement officers to each site. The company now has 65 such officers at 15 locations. The officers have helped to bridge the gap between the ultra-traditional workplace cultures of India and lean management’s emphasis on employee empowerment.

Cutting: Before Lean / After Lean

Implementing a cellular design was a significant step toward improving first-time quality and balancing flow to takt.

Results: Improved productivity by 35%, made significant strides in on-time delivery and first-pass yield. Increased sales by 2% during a severe economic downturn. Competitive position was strengthened, lead time improved, and absenteeism and attrition was reduced.

Behind The Blackstone Group’s Success

The Blackstone Group is a leading global alternative asset manager and provider of financial advisory services listed on the New York Stock Exchange (BX), with total fee-earnings assets under management of $92.2 billion as of March 31, 2009. The company evaluates investments based on its goals to create positive economic impact and long-term value for its investors, the companies it invests in, the companies it advises and the broader global economy.