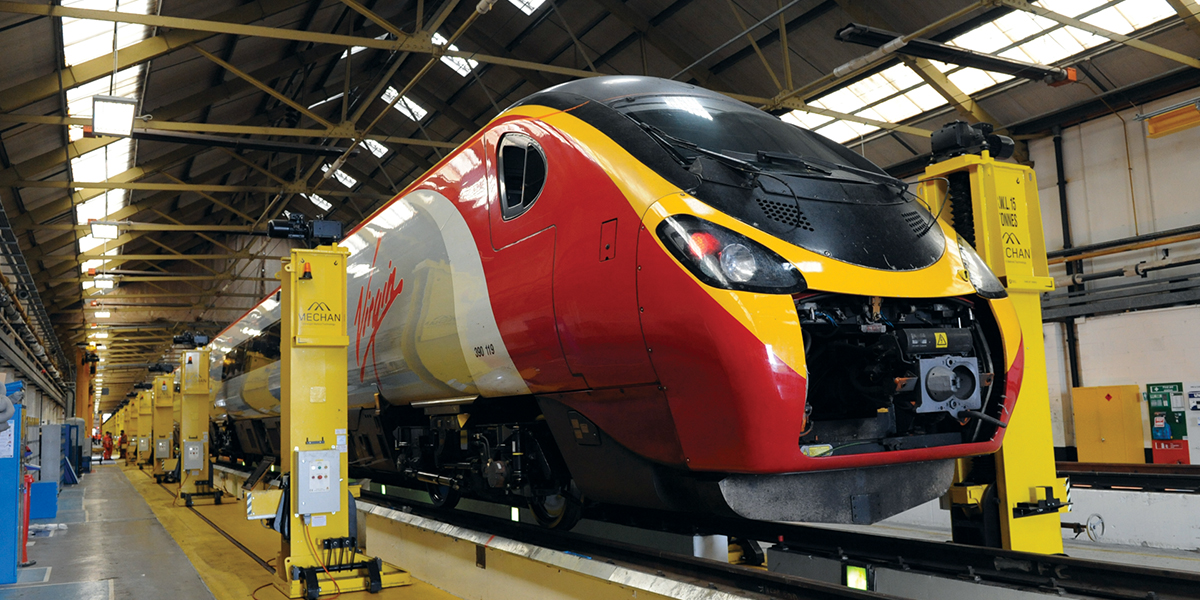 Maintenance issues on a new fleet of trains that Alstom Transport serviced for Virgin Trains were causing the company to miss the availability targets specified in their contracts. To turn things around, Alstom began to apply lean techniques—rapid changeover methods and policy deployment, in particular—to transform the maintenance practices in its depots.

The availability rate for the high-speed, tilting passenger trains on Virgin’s West Coast Main Line was averaging just 72 percent. In addition to routine maintenance, other service issues included faulty air-conditioning units and out-of-service toilets. When minor collisions occurred, it was taking six weeks to repair trains and get them back into service.

After Alstom directors attended LeanSigma® training sessions hosted by TBM, they came together and defined four objectives for the company:

Non-incremental goals like these—doubling the reliability of the Pendolino trains and increasing sales by 100 percent—might be characterized by people in any organization as “unreasonable ambitions,” notes Richard Holland, Vice President and Managing Director of TBM Europe. But setting such goals is essential if a company is going to stop doing things the way they have always been done and achieve a step-change improvement in performance. “Managers need to take a risk and expect significantly higher results,” he adds.


Challenge: Alstom introduced a new train for Virgin. They were contracted to have 47 out of the 52 trains in the fleet in service each day and they were struggling to keep 38 trains running.

Alstom’s business leaders identified roughly 20 potential improvement projects to support their unreasonable ambitions. Early wins at the five maintenance depots on the West Coast line began the process of changing the expectations of everyone in the company.

Employees at one of the depots, for example, resisted participating in a kaizen event aimed at reducing the time it took to change out an air-conditioning unit. The union maintenance workers didn’t think the kaizen was necessary because four people could change a unit in about nine hours, which was considered a fairly good turnaround time. But, looking at it from another perspective, that was almost equivalent to one week’s work for a full-time person. Also, a “spaghetti diagram” created during the analysis of the process showed that maintenance workers collectively walked 12 miles—to the warehouse, to the stores, to get the keys to the crane, and back to the train—looking for tools and other supplies during a single unit change.

In total, by moving materials and equipment closer to the point of use, the kaizen team identified changes that would ultimately whittle down the distance walked to under one mile and eventually reduced the AC unit replacement time to two and a half hours. Similar improvements—including the reduction of vehicle repair times from 42 days to just 72 hours at one depot—gradually changed the mindset of employees.

“When we did make the improvements, we didn’t release any people, which is an important thing,” says Steve Hadfield, Business Improvement Manager at Alstom Transport.

“We created more work and more hours, and we’ve taken other contracts on. We haven’t used lean to downsize our business. That’s important when you’re trying to [implement lean] over a long period of time.”

In the beginning, Alstom created and managed the policy deployment action plans from its Manchester location using an Excel spreadsheet, which were laboriously updated for each monthly review. While it worked, this method only provided a limited, high-level overview of the action plans. A more comprehensive overview was only possible using a poster-sized piece of paper that could not be viewed on a computer screen.

Maintaining such information in a central location had several other disadvantages. Off-site managers had to travel to Manchester for the review meetings, requiring an entire day away from their operations. In addition, changes and adjustments to the plan that the team validated during the meetings could be communicated only to the teams on- site and implemented at a later date.

Results: Train availability increased from 71% to 90%. Virgin renewed Alstom’s maintenance contract 3 years earlier than expected because of its improved service performance. The company reached its five-year growth goal ahead of schedule and doubled productivity.

Today, the company’s annual financial targets and expected actions identified through the catch-ball process are saved directly in Dploy Strategy. This helps ensure that everyone in the organization—from the top down to the bottom up—can track activity and validate performance.

Train availability on the West Coast Main Line had increased to 90%, sufficiently impressing Virgin Trains that the company renewed its maintenance contract with Alstom three years early, extending it through 2022. Alstom had met all of its initial objectives years earlier than anticipated, prompting the management team to raise their unreasonable ambitions even higher.

To sustain its momentum, the company has tightened its management system by implementing a standard daily management process. Managers at all levels have visual performance review boards that they review with their direct reports each shift, prompting them to immediately address any issues.

“So often, lean implementations focus on the tools that are needed, such as 5S or standard work,” notes Richard Holland.

“Without the strategic focus and management system to support it, a lean program will not survive. We are focused on partnering with companies over the long term to help them implement a sustainable lean transformation.”